Acclaimed film curator and cinema critic Konstantin Shavlovsky will curate a 9 film season of classic films of the Soviet New Wave. The films will be screened on original formats or DCPs. They will be introduced by leading directors, film critics and commentators, providing a thrilling insight into the provocative generation of directors who used perestroika to engage with the outside world and create a punk protest cinema that still has resonance today.

Rashid Naugmanov, Kira Muratova and Otar Iosseliani are among the latest directors to confirm their involvement in ‘Youth on the March! The rise of the Soviet New Wave’. This film season will be London’s first ever attempt to trace the antecedents of East European punk.

Otar Iosseliani will open the film season in person with a screening of his Cannes prize winning classic film, ‘Falling Leaves’ on Wednesday 2nd May. He is Georgia’s most celebrated film director, a key member of the Soviet Wave and prize winner of films at Berlin, Venice and Cannes Film Festivals. The screening of ‘Falling Leaves’ will be a collaboration with the Georgian London Film Festival and will be followed by a Georgian banquet with some of Georgia’s finest chefs at Terriors, Trafalgar Square on 2nd May.

Rashid Naugmanov is widely seen as the leading director in Kazakhstan’s 1980s New Wave, with Needle winning prizes in Berlin, Toronto and Sundance. The film starred Victor Tsoi, the Soviet Union’s most iconic rock star, who died in a plane crash in 1990. Naugmanov will introduce the film in person on Wednesday 20 June.

Kira Muratova is one of the world’s leading female filmmakers. Her iconoclastic filmmaking style means her films have been repeatedly banned or censored. Kino Klassika is proud to present this rare opportunity to see Muratova’s early masterpiece, Long Goodbye, which was banned as soon as it was released. One of the great film rediscoveries of the perestroika period of the 1980s, this film is long overdue a London screening. 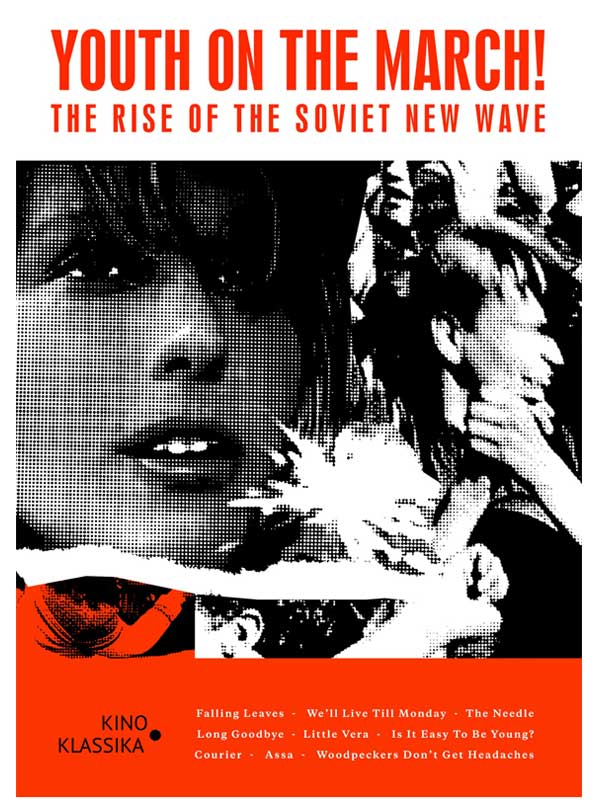 FALLING LEAVES by OTAR IOSSELIANI (1966)
An idealistic young worker discovers the immoral realities of a state-run wine collective in this complex meditation on factory life, disappearing rural traditions and Georgian history.
2 May, 6.30pm

WE’LL LIVE TIL MONDAY by STANISLAV ROSTOTSKY (1968)
A bittersweet comedy about a high school history teacher who must choose between his head and his heart: will he abide by the rules of school or give way to his natural warmth of feeling towards fellow teacher, Natalya?
9 May, 7.30pm

LONG GOODBYE by KIRA MURATOVA (1971)
This little-known masterpiece by Kira Muratova focuses on the rare narrative of a mother’s overbearing love for her son.
17 May, 7.30pm

WOODPECKERS DON’T GET HEADACHES by DINARA ASANOVA (1975)
Young boy Mukha longs to be taken seriously as an adult and a rock musician. When he falls in love one summer, he begins to hear music everywhere, from the rain to the woodpecker’s rattle.
22 May, 7.30pm

COURIER by KARIN SHAKHNAZAROV (1986)
Russia’s equivalent of the Breakfast Club follows teenager Ivan as he rebels against tradition, in the exciting new world of Adidas, skate-culture, breakdancing and pop music.
30 May, 7.30pm

IS IT EASY TO BE YOUNG? by JURIS PODNIEKS (1987)
Hailed as one of the most controversial films of the era, this ground-breaking documentary is a portrait of rebellious teenagers growing up under communist rule in Latvia.
7 June, 7.30pm

ASSA by SERGEI SOLOVEV (1987)
The film that brought Russian rock music from the underground into the mainstream, this cult crime classic is the tale of a young nurse, her mafia lover and a young musician.
13 June, 7.30pm

THE NEEDLE by RASHID NUGMANOV (1988)
Part Pulp Fiction, part Betty Blue, Needle charts the attempt of enigmatic drifter Moro, who returns to Almaty to find his ex-girlfriend stuck in the underground world of drugs, mafia and violence.
Introduction by Rashid Naugmanov
20 June, 7.30pm

LITTLE VERA by VASILI PICHUL (1988)
The film that shocked Soviet audiences with on-screen nudity for the first time, Little Vera is the portrait of a feisty, mean-minded hellcat who injects chaos into her dull provincial town.
27 June, 7.30pm