From the introduction, Nick Foulkes’s enticing choice of words seduces the reader to explore this book with excitement and anticipation, somehow letting us realise that we are in for a treat. Divided into 28 stories, Foulkes takes us into a journey that illustrates mankind’s obsession with the concept of time, from the Paleolithic, through ancient Egyptian water clocks all the way to the wristwatch taken to the moon.

You can dip in and out and read a story or two at a time, but my personal suggestion is that you sit by the fire, Armagnac in hand and immerse yourself in this beautifully crafted narration of how our species has attempted to tame time from as long as we have walked the Earth. Foulkes’s fascination with watches transpires in every page. His love for the mechanical intricacies and the magic encapsulated into such a tiny space is infectious. However, this is not a geeky book for collectors or watch maniacs; and if you feel a bit confused by any of the lingo, an extensive glossary at the end will help you sound like an expert by the time you finish reading.

As Foulkes reminds us, watches and clocks are travellers from another time. For the modern mind, understanding life without understanding time may seem impossible, such is our dependency on this arbitrary concept that has turned up to define the Universe as much as space does. Foulkes combines academic levels of knowledge with heart-felt sentiment and touches of his very personal humour to guide us through this incredible journey of human ingenuity.

The Karnak Clepsydra (water thief), the world’s first accurate time piece, the Julian calendar (Julius Caesar) -which is pretty much the one we use today, are just two examples of the moments in history selected by the author to help us understand the initial enormity of a task that now we all take for granted. Foulkes’s extensive research brings readers the surprise of including the Su Song’s clock, now recognized as the “missing link” between the purely hydraulic clepsydra and the all-mechanical escapement clock.

Another wonderful surprise is the inclusion of the timepieces developed in Japan’s Edo period (17th century) which met the complex and fluctuating nature of time as understood by this country during that time, called the Wadokei. These timepieces used the lunar calendar and were completely unique to Japan. Clocks were wound and set at the beginning of the Japanese day, which commenced at dusk. Significantly, the temporal day did not begin at a set time, such as midnight, but when daylight ended. Dictated by sunrise and sunset, each day was divided into day and night, each comprising six periods of time known as koku. These koku varied in duration, with seasonal changes in the length of day and night. This “easy” way of measuring time lasted until the 1860s, when the Meiji period embarked Japan into a vertiginous process of modernization.

I found particularly absorbing Foulkes’s tales of automata that go back to the most obscure centuries of the Middle Ages. As the Renaissance approached, ever more ambitious and elaborate clocks combining the time of day with astronomical and astrological displays as well as automata became urban status symbols, at a time when city-states shone brighter than ever before or after. The Marvel of Strasbourg (a mechanical cock that crowed) was possibly one of the most famous in Europe.
It wasn’t until the late 15th century that watches started being worn as accessories. They developed from spring-driven clocks, which were more compact than weight-driven clocks. However, they were terribly inaccurate and worn by the trendsetters of the late Renaissance as a kind of fashion statement, to be seen as different (sounds familiar?).

Peter Henlein is considered the inventor of the watch, first with his Nuremberg egg watch and later, his Pomander. Henlein was immortalized by one of Goebbel’s favourite film makers, Veit Harlan, in his 1939 movie, The Immortal Heart. Other fascinating stories unveiled in the pages of Time Tamed include the discovery of the star of the Cheapside Hoard, – a pocket watch installed within a large Colombian emerald dating from around 1600 and that was lost for 250 years under a pile of rubble. Equally intriguing is the story of Mrs Belville, who used to go around London “giving” accurate time with her pocket watch Arnold (named after its inventor), up until 1940.

Of course Foulkes hasn’t forgotten a chapter devoted to the Big Ben, possibly the most famous clock in the world nor has he ignored the most iconic wristwatches of our time, like the Cartier Santos, which Louis Cartier created for his intrepid aeronaut friend Santos-Dumont in 1904, considered the first men’s wristwatch, or the Jaeger-LeCoultre Reverso, the first Sports watch.
Many other watches have claims to the podium of fame, not least the Omega Speedmaster. No other piece of equipment – let alone a watch – can claim to have been used during the Mercury, Gemini, Apollo, Skylab, Soyuz, Salyut, Space Shuttle, MIR and International Space Station programmes. The Speedmaster contributed to one lunar mission in particular: the Apollo 13. The mission was aborted after an explosion on the outward journey damaged the spacecraft and forced the crew to seek refuge in the Lunar Module. After going once round the moon, they headed back to Earth with the command module, using the Speedmaster to time the crucial engine firing necessary for their safe return.
Whether you are a watch aficionado or just a curious reader, I strongly recommend you get yourself a copy of Time Tamed and enjoy this thoroughly entertaining story of time by one of the most knowledgeable writers in our  profession. 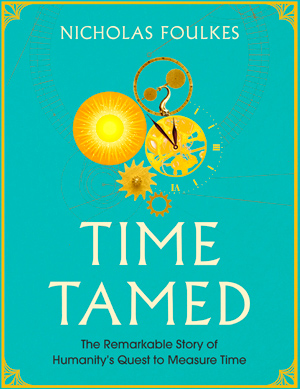 About the author:
Nick Foulkes is the author of more than two dozen works of non-fiction and is widely considered the leading English language writer on watches and timepieces. His most recent book was Patek Philippe: The Authorised Biography. He has written on the subject for numerous newspapers and magazines, including The Times, Financial Times, Newsweek and GQ, and he edits On Time, the twice yearly magazine on watches for Vanity Fair.

Directed by Mark Steven Johnson (Daredevil, Ghost Rider), Finding Steve McQueen is a hilarious film based on the true story …