As someone who considers himself an avid student of film, frequently I come into agreement with fellow movie enthusiasts that older, classic films are always better than more recent ones. Many concur that the new school over saturate their work with special effects, therefore neglecting stronger written screenplays. In these days of lockdown, I have had the opportunity to indulge in exploring cinematographic jewels that I hadn’t had the chance to watch before, many of which support the above notion.

The Duellists is a prime example and, without any doubt, it is among my top five movies. Released in 1977, it was the debut of one of the best film directors of all times: Ridley Scott; and won him the Best Debut Film Award at the Cannes Film Festival. Base on Joseph Conrad’s short story, The Duel, and framed on the backdrop of the French revolutionary wars of the 1800s, the story follows a trivial quarrel between two Napoleon soldiers which escalates to a life-long personal war. The two protagonists are Gabriel Feraud -played by Harvey Keitel, an actor of whom I am a big fan and Keith Carradine on the role of, Armand d’Hubert.

This is a movie that uses beauty to set the mood and often, also to complete the scene. The opening is a duel of swords between Feraud and another man that we later come to find out is the nephew of the Mayor. The Mayor is also a close associate of Napoleon himself. We never find out the reason for this initial battle, but Feraud wins after striking the nephew in his side, not with a fatal blow, but one that draws blood and bring his adversary to the floor.

News of the nephew’s defeat and injury reach the Mayor, who isn’t best pleased. He reaches out to a colleague, a general, who seeks out Feraud for discipline. This general gets to the quarters, where a group of soldiers are relaxed, enjoying some leisure time. Angrily, he demands to know the whereabouts of a Gabriel Feraud, explaining to the whole room what Feraud has done and to whom it has been done. Clearly this is a big inconvenience for the general; his whole manner visibly irritated during the scene.

This is the first time we see Armand d’Hubert. In a room full of roughly 15 men, he is the only man to respond to the commanding officer, letting him know that this was the quarters of Feraud, but presently he is absent. d’Hubert is now saddled with the task of finding Feraud and informing him that he is to return back to quarters and be confined there under close arrest, pending reviewal of the situation.

d’Hubert manages to find Feraud and gives him the message. Here is where the drama starts, because d’Hubert finds him in the ballroom of a palatial mansion, in the middle of a party and interrupts him while he is comfortably engaged in the company of the owner of the house, Madame de Lionne. This is the only reason that I can think of as to why, from this point on, Feraud shows an unquenchable desire to fight, kill if you will, Armand d’Hubert. No other motive makes itself apparent to me throughout the rest of the film and it is never made clear by the director. The two men are of equal rank (lieutenants), so surely Feraud must know that d’Hubert coming to see him was through orders from above. Regardless, the beef starts here.

My favourite scene follows, with the two men hurrying to Feraud’s quarters to discuss the matter further. As both men live within the barracks, I can only assume this is the house of a girlfriend/concubine to Feraud’s. The elegance of the camera work by Frank Tidy creates an eerily tableau that engages the senses of the viewer.

Feraud starts this dialogue: “Your duty is to victimise me. Am I mistaken? You have chosen to hunt me out in the drawing room of a lady for whom I feel the deepest…” d’Hubert cuts him off, maintaining his poise, softly spoken and calm natured: “Sir, I respect your inexpressible sentiment. Now I can assure you that this was no choice of mine.” Feraud interrupts, now seething with rage, “you have insulted me” he states, staring dead in the face of a man who stares back, but with a look of complete confusion, bewilderment, as if to say “how are you so vexed at me for simply passing on a message?” Feraud repeats his declaration, this time at the top of his voice, his temper unmanageable at this point, “you have insulted me!” d’Hubert, ever the gentleman tries to disarm with reason and manners, “I have strained my patience not to insult you” all to no avail. Feraud demands an apology, d’Hubert refuses to give one, so begins their first duel. Feraud hurries out to the front yard, sword in hand, and snatches up an old man who is laid up in the corner on recline, so he can play referee. Surprisingly, despite his anger and insistence on this fight, Feraud, loses, not by sustaining a major injury, but by being floored and somewhat distressed; it takes his mistress jumping on the back of d’Hubert to prevent a more serious injury.

In the next scene, we see d’Hubert visit a friend of his, the army doctor, in order to remedy his minor injuries from the duel. As they chat, d’Hubert reveals with whom he is entagled in a feud and the doctor is pleasantly amused, as he was the one that had to fix up Feraud after his combat with the mayor’s nephew. He goes on to confess that he has had to mend Feraud a number of times, as he is infamous for instigating duels to satisfy his temperamental honour. 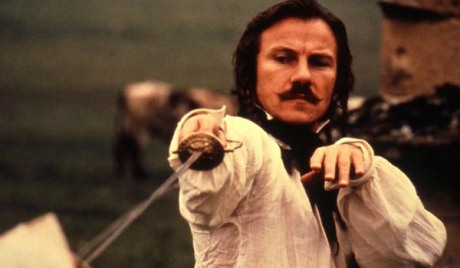 The movie goes on and Feraud steadily goads d’Hubert into battle a few more times over a 15 year timespan. Sometimes Feraud is the victor, sometime d’Hubert. As the war progresses, career wise both men have esteemed themselves through their service to Napoleon’s campaign and both have been elevated to the status of general. Still, any chance he gets, Feraud provokes and demands more duels. It seems he won’t stop until one of them either dies or produces a hand written and stamped apology for everyone to see, by now, their rivalry has become the talk of the town. All the while, poor d’Hubert just wants to focus on his career, and retire into family life without any of that drama.

Let me fast forward to their final battle. After years of campaigning in brutal conditions, Napoleon has been defeated, and new beings have come into power. d’Hubert is in a quasi semi-retirement state, living in his sister’s estate and through his sister’s meddling, married to a local young lady. He now has a permanent limp, probably caused by frostbite suffered while serving out in Russia. One day, as he walks his dogs through their greenery, two men approach and ask where they could find General Armand d’Hubert. When they realise they are in fact in front of him, they let it be known they have been sent by a General Feraud, who demands yet another duel. d’Hubert is mystified, and for the first time he spills out some anger: “I could have you both carted back to where you came from in irons. I swear to God I could whisper, only whisper and you’d both be dead in a ditch before morning. This is my home!” The main speaker of the two replies “we had proceeded on the assumption that you were a gentlemen…” I can fully understand d’Hubert’s frustration. I forgot to mention that there is a point in the middle of the film, when Napoleon has lost control in France, and Feraud is due to be executed for making comments in blind allegiance to Napoleon, that had offended the new rulers of the country. Upon hearing this, for some reason d’Hubert makes an appeal on his behalf and as he had made friends in the right places, manages to get the execution dropped down to a mere banishment.

Back to the final duel, all parties involved have agreed that pistols will be drawn for this duel, two bullets in each gun. The next day, battle commences on the same green in which Feraud’s two messengers propositioned d’Hubert the day before. After much dancing around the fields, Feraud misses both attempts at d’Hubert and is now caught in an extremely compromising position: on his back on the grass, with d’Hubert standing over him, one bullet left in the chamber of his pistol. With supreme resentment, Feraud screams at d’Hubert to finish off the job and spare him the embarrassment. d’Hubert, I repeat, ever the gentleman, finally manages to conclude this torment: “you have kept me at your beck and call for 15 years. I shall never again do what you demand of me. By every rule of single combat, from this moment on, your life belongs to me, is that not correct? I shall simply declare you dead. In all of your dealings with me, you will do me the courtesy to conduct yourself as a dead man. I have submitted to your notions of honour long enough. You will now submit to mine.”

The very last scene shows Feraud standing on a hill, overlooking a lake. Zooming into his face you see nothing but disgrace and spiritual and mental unease.

Despite being the undoubted antagonist in the situation, Harvey Keitel portrays Feraud excellently. His relentless pursuit of d’Hubert and passion for battle constantly amused and entertained me throughout, even though it isn’t for any particularly rational reason.
Another captivating factor with this picture, is how well captured the feel of the 1800s is by a film produced in the 1970s. Such attention to detail. While writing this piece, through my research, I came to realise the Duellists was Ridley Scott’s debut movie. I’m amazed by how well put together the film is, that being said, after such a debut it doesn’t surprise me how successful and illustrious a career this director has gone on to have, being responsible for masterpieces such as Alien, Blade Runner, Thelma & Louise, Gladiator, Hannibal, and American Gangster to mention just a few.

The Duellists proves that you don’t need overwhelming special effects or rotund soundtracks to make a good film and that most definitely, older movies are the best!

The Duellists is available to watch on Sky cinema and on Netflix.