The very first thing I do after arriving in Florence is to go to the Santa Maria Novella Pharmacie, and with good reason. I have a habit of stocking up their divine scents soaps and candles… which are not cheap.

So after my shopping spree, I always need to settle my nerves and think of a plan to explain to husband how my credit card bill got so large. The answer, to sit on the terrace of my favourite bar in the square adjacent to Santa Maria Novella’s church to enjoy one of my favourite cocktails, a Negroni, a devilishly wicked cocktail that matches the little devils depicted on the frescoes of the church. With the first sip, my memory travels back to the 70s, when Campari was super chic, its vivid red served on the rocks with a splash of soda and a slice of orange.

In 2017, the craze for Campari resurged with the Campari Creates initiative, which saw artist Eley Kishimoto recreate the iconic Campari lettering on the Banks of the Regent’s Canal. The year after, Mark McClure created the art instillation Mostra which invited consumers to enter the magical world of Campari. 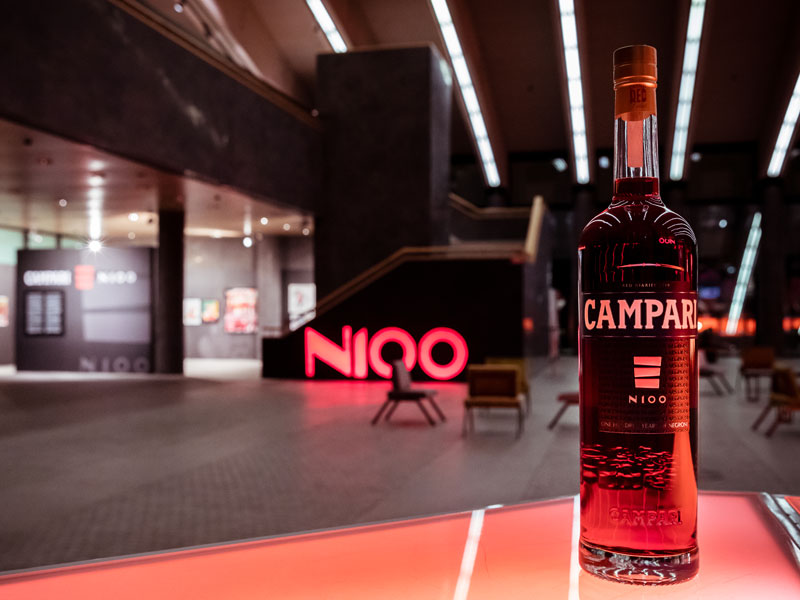 This year, in celebration of the iconic cocktail’s 100th anniversary, Campari and Galleria Campari present N100. The Art of Negroni, an exhibition of illustration, pictorial and photographic works from around the world to celebrate Negroni. The show features 29 artistic interpretations of the iconic cocktail with a CAMPARI soul. The cocktail was invented in 1919 in Florence at the Caffé Casoni by Fosco Scarselli, when the erudite and refined Count Camilo Negroni asked him to add gin instead of soda to his favourite drink: the Americano.

Starting from three equal parts of Red Vermouth, London Dry Gin and the indispensable Campari that make it up, the imagery of Negroni has been pieced together over the years through its appearances in literature, art and cinema. The Negroni is in fact drunk by James Bond in the film For Your Eyes Only; Ernest Hemingway included it in Across the River and Into the Trees; Audrey Hepburn is said to have called for Negroni to be served at the parties she organised during the filming of Roman Holiday; and Orson Wells apparently became a fan of the cocktail after discovering it in Rome in 1947 while shooting Black Magic.

Looking back at its fascinating history, some of the most interesting voices of the Italian and international artistic panorama have been called upon to interpret the iconic cocktail. Campari has inspired artists from all over the world, collaborating with partners such as Central Saint Martin’s College of Art and Design of London, the IED – Istituto Europeo di Design and the artistic collective Visionar from Milan. 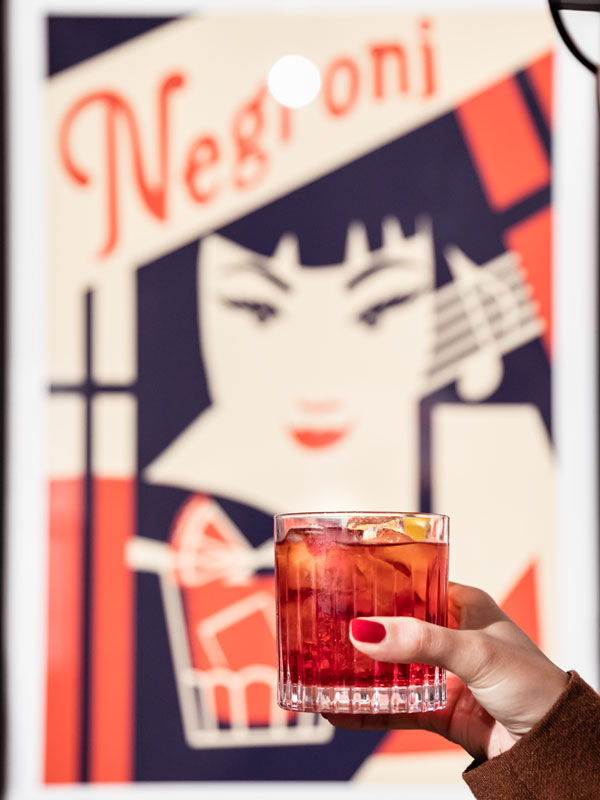 The display titled The Art of Negroni showcases the results of these collaborations through a diverse collection of creative installations, illustrations, pictorial and photographic works dedicated to the Negroni cocktail and to what it represents, both in the collective imagination and in the personal visions of the artists involved.

The variety of works presented pays testimony to the various stylistic approaches that also reflect the range of refined billboards from the early 20th century to the Futurist designs ushered in by Depero, and the famous lettering in the works of Bruno Munari, while the subjects represented are inspired by the iconic Campari bottle itself, the botanical notes in the cocktail ingredients, right up to entirely abstract interpretations conjured up by the Negroni bouquet.

The Campari approach, both visionary and forward-looking, has thus always been a source of inspiration, and not just for bartenders.

Through an approach which is simultaneously classic and contemporary, the brand has forged artistic partnerships with both Italian and international illustrators, painters, directors, poets and sketch-artists, contributing to the development of an entrepreneurial vision for an avant-garde brand. The Art of Negroni is therefore also a homage to the extraordinary world of Campari advertising material, which ever since its origins in 1860, has made use of the arts as its narrative vehicle and communicative channel of choice.

Just over a year ago, the luxury watchmaking Swiss brand Vacheron Constantin opened its ...

Just over a year ago, the luxury watchmaking Swiss brand Vacheron Constantin opened its first boutique in Edinburgh, just a …