By Alexandra Sankova in collaboration with the Moscow Design Museum
Published by Phaidon.  Hardback £24.95

It hardly seems possible that about sixty years ago we looked to the skies above for the brave new world that would be the progression of mankind and an endless frontier of possibilities and adventure.As the Cold War gained momentum, space became a dramatic frontier in the competition between the democratic world lead by the US and the communist USSR. Soviet Space Graphics brings together more than 250 illustrations from the Soviet Union that reveal the rarely seen depictions of the space race from their point of view, including detailed diagrams around themes that were part of the Soviet space programme.

In a world before special effects and CGI (computer generated imagery), the imagination of artists provided the backdrop to an individual’s flights of fancy to the outer reaches of the solar system and beyond out into the universe.  Far from being perfunctory and merely illustrative, the drawings and paintings encapsulated the feelings of optimism, intrigue and discovery.  Readers became engaged in the action and committed to the effort of the state in conquering space.

At the time, the USSR produced a wealth of popular-science magazines which oozed Communist sentiment and served as a vital device for the promotion of state ideology. Many illustrations from mostly lost magazines are included in this book, giving readers a change to take a trip down Soviet nostalgia lane, to explore a utopian socialise world in space that never came to be. Paradise lost. 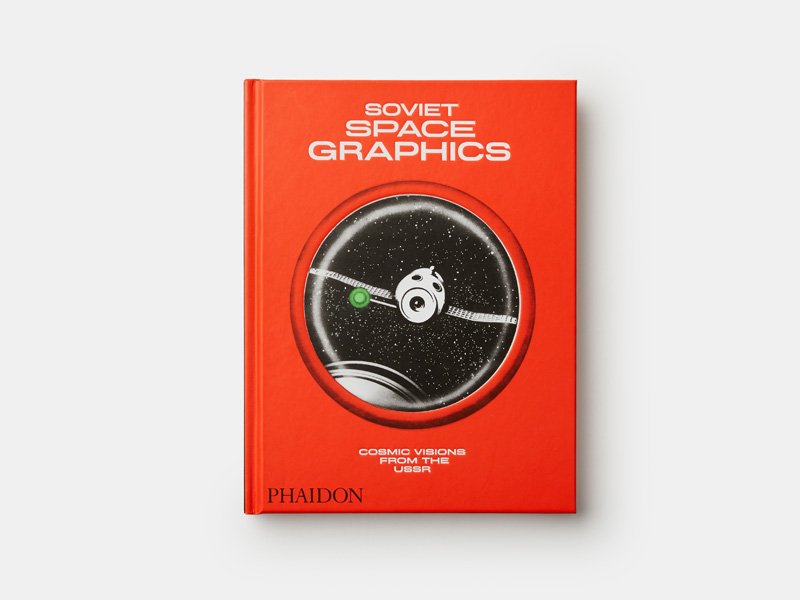 From the very outset of the Russian Revolution (1917 – 23) the Soviet government had a commitment to make the achievements of science, industry and culture accessible to all.  The transformation of the country to a modern and different form of governance was ideally suited to dreaming big, masterplanning the future, and presenting the most incredible and aspirational visions to society.  The young Soviet state quickly recognised the opportunity that astronomy and space flight represented in fulfilling their needs.  But it was not until the successful launch of Sputnik 1 in 1957 that the promises began to have a tangible and realised form.  A number of other Soviet “firsts” followed: the Luna 2 space probe reaching the moon, the successful propulsion of Yuri Gagarin into space and his safe return, and equally the same for Valentina Tereshkova.  Alexei Leonov became the first to exit his Vostok capsule in space and return safely in 1965.

With the American’s landing on the moon the imagination of the illustrations became ever more expansive: colonies on distant worlds, meetings with strange new civilisations, and their realisation on contact that the socialist means of government and society were correct.  Soviet citizens lived vicariously through the imagination of the artists and their brave new worlds that would become tomorrow’s reality.

The book is a pictorial homage to that lost world where the future offered us everything we dreamed of in a bright clean interplanetary socialist system.  Gone were the stresses and rigour of the everyday toil.  The future was an exciting place, free of germs and grime, toil and tension.  In its place would be the endless possibilities of exploration and excitement, a brave new world of adventure and affluence.  The true socialist state of humanity was in space. 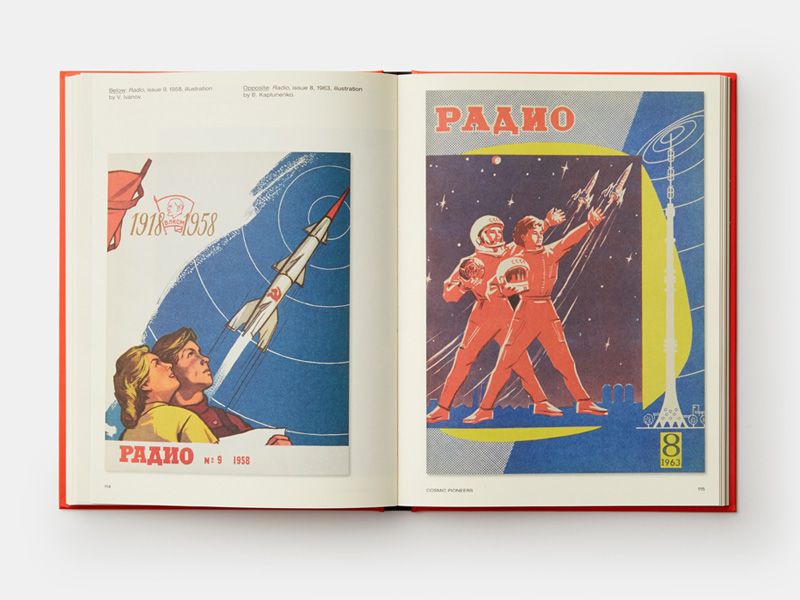 Soviet Space Graphics is divided into four chapters: Soviet Exploration, which depicts images of the USSR ambition to conquer the cosmos, including dogs Belka and Strelka; Cosmic Pioneers reveals heroes of the time, such as Yuri Gagarin; Future Visions concentrates on the visions the Soviets had of future urban life; and lastly, Alternative worlds, which focuses on adventures into the unknown.

Although such worlds never materialised there is a sense of longing about how the future was viewed.  Conquering space became a secondary consideration compared to the problems of life on earth.  Subjugation of the national economy to exploring an inhospitable and unliveable environment became a less important requirement.

The author, Alexandra Sankova is the director and founder of the Moscow Design Museum, which was established in 2012 with the mission to record, preserve and promote the design heritage of Russia. She has curated and co-cureated a numer of exhibitions at the museum that have toured internationally, including Soviet Design 1950-1980 (2013) and Discovering Utopia: Lost Archives of Soviet Design (2016) among many others. She is also author of 23 (2010) and co-author of Designed in the USSR: 1950-1989 (Phaidon, 2018) and VNIITE: Discovering Utopia – Lost Archives of Soviet Design (2018).

The Summer Exhibition is the world’s largest open submission contemporary art show. It has ...

The Summer Exhibition is the world’s largest open submission contemporary art show. It has taken place every year without interruption …

Tutankhamun: Treasures of the Golden

Saatchi Gallery. London. Until 3rd May 2020 Commemorating the centenary of the discovery that captivated the world, this exhibition brings …