Not all heroes wear a cape and most prefer to keep their identity anonymous. This is the case of the Alycats, a team of award-winning photographers that regularly donate their time and the fruits of their work to fight illegal hunting and poaching in Africa in support of Singita’s 100-year conservation purpose

Uncontrolled hunting and poaching have severely decimated African wildlife populations. To give you an example, lion populations have declined by half in just 25 years and in 2020, 394 rhinos were poached in South Africa alone, which means one animal every 22 hours.

South Africa based Singita is a company that operates game lodges in South Africa, Zimbabwe, Tanzania and Rwanda. For the last 28 years, Singita and its partners have been custodians of iconic wilderness areas in these countries helping to protect and preserve these gifts of nature for future generations. By attracting guests for an exceptional safari experience at 15 award-winning lodges and camps, they are able to work with local partners to substantially contribute to the preservation of the land and existing wildlife populations, whilst helping local neighbouring communities to prosper socially and economically.

Breakfast with a view at Singita’s Malilangwe House in Zimbabwe

Singita has always seen conservation as its purpose. Founder & Executive Chairman, Luke Bailes states, “As an ecotourism and conservation brand, Singita is unwavering in its commitment to preserve and protect Africa’s wilderness for future generations. Since opening its first property – Singita Ebony Lodge – in 1993, sustainability, environmentally conscious hospitality and the empowerment of local communities have been cornerstones of this enduring 100-year purpose.” For this purpose, they have strategic partnerships with non-profit funds and trusts in each of the countries in which they operate. “Care for our people and care for our planet “ is a central focus in their operating model.

A lion gazes over his kingdom in the Singita Grumeti Reserve.

Mankind’s unsustainable production and consumption patterns have led to the planet losing nature faster than it can be restored. As the 2020s are globally set to be defined by transformation, restoration and regeneration, Singita’s efforts are fully aligned with global conservation goals. Bailes points out that “Modern conservation requires a keen focus on keeping tourism, communities and wildlife in a constructive balance.”

Singita is committed to restoring and protecting critical biodiversity hotspots areas – acting as joint custodians of close to one million acres of land across four African countries. They oversee wildlife management and wide-scale ecosystem restoration of some of Africa’s most diverse wilderness areas– from the vast savannas of the Serengeti to the rainforests of Rwanda’s Volcanoes National Park; from remote south-eastern Lowveld of Zimbabwe to South Africa’s pristine bushveld.

A leopard lazes on a tree in Singita, Grumeti.

These efforts support the protection and recovery of some of the most endangered species in these systems, such as the white and black rhino, mountain gorillas, lions, leopards and vultures, as well as endemic local orchids to name but a few examples.

In the words of Luke Bailes “Community partnerships only work if our commitment to local communities is so deep that they trust that what we’re doing to preserve these wilderness areas and wildlife–is in their interest.” He realises that in order to achieve this ambitious goal, communities need a long-term commitment and tangible benefits so, in order to support social and economic prosperity in these regions, Singita’s various trust and fund partners drive a wide variety of programmes: from holistic early childhood development to onsite environmental education for school groups, academic scholarships, digital learning opportunities for remote villages, English classes and adult bridging courses – as well as empowerment programmes for women and girls.

The Singita Lowveld Trust is deeply involved in educational initiatives for local children.

Examples of community partnership projects include small-scale farmers agricultural cooperatives that supply lodges, honey production, and local arts and crafts. The idea is to reduce the dependency of these communities on the surrounding limited and often very degraded natural resource base, grazing land, harvesting of firewood, building materials and bushmeat.

Fair sharing of Earth’s resources is vital for sustainable living and Singita tries to minimise its ecological footprint. Sustainability is a natural part of how they conduct business, build new properties and create guest experiences. As such, they’ve joined Bioregional’s One Planet Living, incorporating a framework with 10 key action points that range from Equity and Local Community to Zero Waste.

View of the solar plant at Singita’s Faru Faru lodges.

Inge Kotze, Singita’s General Manager, Conservation, says, “At Singita, a sustainable world is one in which people enjoy happy, healthy lives within their fair share of Earth’s resources, leaving space for wildlife and wilderness. Sustainable operations across all our lodges and support offices play a major role in reducing our impact and leveraging our influence through our supply chains to ensure we tread lightly on our planet, whilst also using our low volume, low impact nature-based tourism model to preserve and protect large areas of African wilderness for the future.”

For over 20 years the Alycats have been guests at Singita’s eco-lodges. They’ve witnessed the group’s commitment to the protection of Earth’s greatest assets and learned how they’ve led the way to combat the uncontrolled hunting and rampant poaching that has decimated some wildlife populations. The Alycats’ personal experience of being in the bush, garnering knowledge from the highly-trained trackers and guides, amplified the sheer magnitude of conservation challenges.

The inspiration for the Alycats was borne out of their immense admiration and respect for the unwavering commitment of Singita to protect iconic landscapes and so Alycats decided to support Singita through the medium of fine art wildlife photography print sales. For that purpose, they have produced a collection of artwork available through their website, with 30 per cent of the proceeds of all sales donated to Singita’s conservation programmes (learn more HERE).

As an example of the extraordinary work all these people do, I’d like to include here a case to illustrate what Singita’s partner, The Grumeti Fund, does in Tanzania, captured by the camera of one of the Alycats. It is about the rescue of a giraffe with a horrific injury caused by a snare.

Home-made wire snares are the predominant form of hunting across Africa.

Home-made wire snares are the simple, most effective bush-meat hunting technique practised. These devices are amongst the highest killers of wildlife in the region. Hunters cross into wildlife reserves laying snares along game paths to catch the animals and either sell them locally to poor rural villagers or further afield to commercial demand for these delicacies. The dire result of snaring is usually a deep painful wound that becomes infected and results in a prolonged, excruciating death.

The Grumeti Fund’s anti-poaching unit constantly monitor their 350,000-acre concession and have rescued thousands of animals combining cutting-edge technology, aerial response and boots on the ground to combat poaching.

The Grumeti Fund has a dozen outposts in the western corridor of the Serengeti.

From their 24-hours control rooms, dedicated operators are able to identify the closest available anti-poaching teams and guide them to the detected threat. They are covered by over a hundred highly trained scouts on duty 24/7. In 2020 alone, they found 3,000 snares.

In the case documented here, a snared giraffe was tracked by scouts alerting a rescue team to attend to his wounds. After the animal was darted, he was carefully handled by the team to ensure no further harm would come to him – the strategically placed ropes gave primary support to avoid injury.

The wound was badly infected but the vets cleansed it and gave the animal drugs to decrease his pain and fight the infection.

The wound was very badly infected as it had been three days between getting caught by the snare and being discovered by the scouts. Soon after the treatment was administered, the anaesthetic wore off and the team had the massive task ahead of helping the giraffe to regain his footing avoiding further damage as he wobbled to full height.

It takes a full experienced team to ensure the giraffe stands up without hurting himself any further.

One thing that my Alycat told me was how, soon after the giraffe gained his footing, “He gazed at the veterinarian who had treated his wounded leg, almost as if he was thanking him for saving his life. The animal limped off into the bush where he fully recovered.”

The giraffe gazes at the veterinarian almost as if he was thanking him for saving his life.

The Alycats have kindly offered our readers any of the below exclusive prints, A4 size, just £50.00 during July and August 2021. All proceeds going to the Singita Conservation programme. 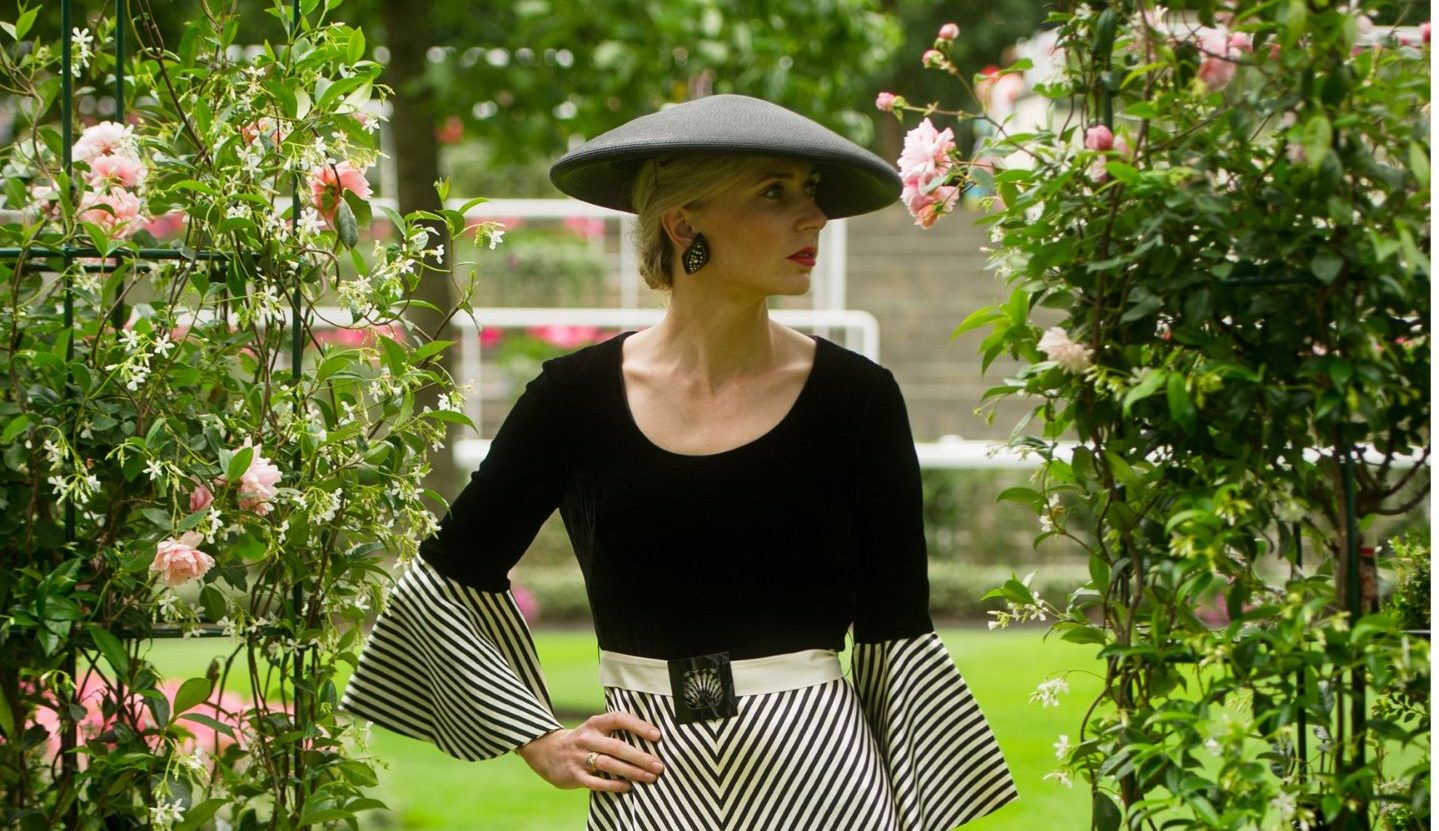 Fashion is one of the major polluting industries, with the textile industry accounting for an estimated 25% of the total …